Central Universities Common Entrance Test – CUCET 2022 , is an all-India examination to be conducted by the National Testing Agency (NTA) for admissions in undergraduate and postgraduate courses in various central & state universities of India including Delhi University, JNU , Jamia University , BHU, Allahabad University, Tezpur University, the University of Hyderabad amongst others.

The Executive Council of University released a notice on December 17 2022 , for CUCET Exam 2022 . stating that the CUCET exam for UG and PG courses in central universities can be conducted from the academic year 2022-23 through NTA. The admission notifications are likely to be released in the month of March 2022 for CUCET Exam 2022 . 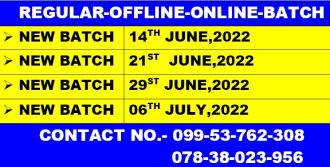 Latest Update:
CUCET Exam notifications have been released for the academic year 2022-23. On October 3rd 2022 the provisional answer keys along with the question paper and recorded responses have been uploaded on the official website for CUCET Exam 2022 , Check CUCET Latest Updates to know more.

CUCET Exam Date 2022
CCUCET 2022 notification or final recommendation on the exam will be released soon.
The expected CUCET Exam 2022 Date for the release of the application form is in the last week of March 2022 or the first week of April 2022.
Enlisted below are important events related to this entrance CUCET Exam 2022 . 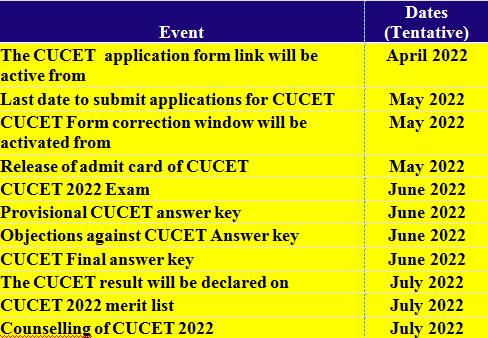 CUCET 2022 Application fees
The fee varies according to the mode of payment. PwD candidates are exempted from paying any application fee.

CUCET Syllabus Exam Pattern 2022
Based on the news published in the TOI newspaper, the question paper would comprise of subjects listed below: for CUCET Exam 2022 .

The information above is provided based on the pattern and syllabus of 2022, current affairs can be added to the pattern. However, there is no clarity yet as the notification is to be soon released by the government.

The pattern followed previously is enlisted below. In the new CUCET Exam Pattern the number of questions shall vary.

CUCET Exam 2022 Application fees
The fee varies according to the mode of payment. PwD candidates are exempted from paying any application fee.
Here are the steps to fill the CUCET Application Form: 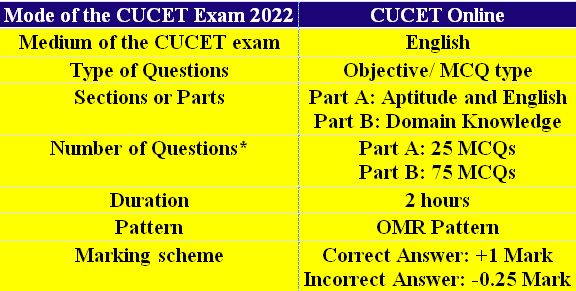 With NTA Common Aptitude Test - for CUCET Exam 2022 you can get admission into any of the 54 universities. Let us understand about the top universities below:

CUCET 2022 Syllabus: Expected Topics
Given are the expected topics for UG or Integrated courses offered through this entrance exam.

CUCET Expected Topics for Non-Engineering Courses
There will be only one test paper for this session. The question paper will comprise 100 MCQs from the following discipline. i.e. English, Numerical Aptitude/Data Interpretation, Analytical Skills, Reasoning, General Aptitude, General Knowledge.

CUCET Expected Topics for Engineering Courses
Part A will comprise 25 MCQs from the following discipline. i.e. English, Numerical Aptitude/Data Interpretation, Analytical Skills, Reasoning, General Aptitude, General Knowledge.
Part B is a domain knowledge-based section that will check topics related to Physics, Chemistry, and Biology.
You must answer Section I (Physics) & II (Chemistry). From Section III and Section IV, only one section either Mathematics (Section III) or Biology (Section IV) should be attempted and answered. In case, a candidate answers both Mathematics and Biology Sections, the best of three sections i.e. Section I, II, and either III or IV will be evaluated and considered for result preparation.

How will Super Grads Students be benefited ?